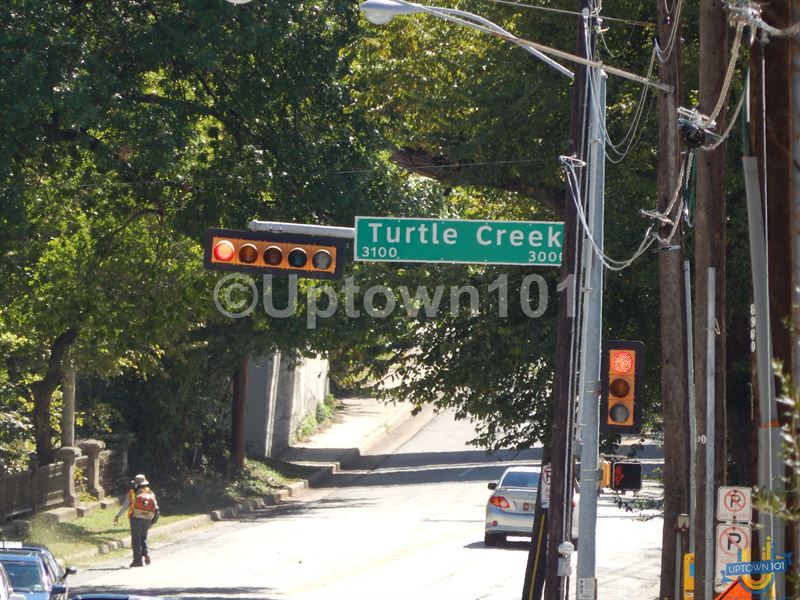 Turtle Creek Dallas: Close to Everything and Quiet at Night

Turtle Creek Dallas: Close to Everything and Quiet at Night

History
Before there was Uptown Dallas, Turtle Creek Dallas was considered the hot spot for living and working in Dallas. It has old and very beautiful trees and considerably extensive park areas near Cedar Springs and to the South. Turtle Creek Dallas also has two public entrances to the Katy Trail, with fairly quick access to it from any point in the district.
A little known fact: The classic TV show Dallas had JR Ewing’s office (outer shots) filmed at one of the office buildings here, bordering Turtle Creek Dallas.

Attractions
This district is home to the Rosewood Mansion at Turtle Creek Dallas, a posh five-star resort with nearly a century of Texas history behind it. Even though the Mansion has changed hands several times since it was first built in 1920, most of the original European antiques, interior furnishings and fixtures still remain. The original owners were Dallas cotton barons, traveling the European continents for the design elements still present in the Mansion today.

Dining at the Mansion, you will experience the restaurant’s “haute cuisine” which has been touted as one of Dallas’ finest places to dine. The cuisine has been described as “Texas style,” influenced by regional ingredients and flavors.
Near the Turtle Creek Dallas district is the American Airlines Center, home to many concerts and sporting events, including the Dallas Mavericks pro basketball team as well as the Dallas Stars NHL Hockey team. From the American Airlines Center you can hop the M Line Trolley and get back to Uptown Dallas for dinner, drinks and entertainment.

Green Space
There is MUCH greenery here, and a wide variety of places to walk a dog. There are many great places to jog as well, including access to the Katy Trail. There is also Robert E. Lee Park at Turtle Creek Dallas and N. Hall Street which spans both sides of Turtle Creek Dallas itself, as well as Reverchon Park and Recreational Center at Turtle Creek Dallas Boulevard and Maple Avenue. There are lots of green spaces for pets and recreation, such as Frisbee golf and even a city baseball field.
Residential Space
What Turtle Creek Dallas residents find most appealing about living here is that you have very quick access to the best parts of Uptown Dallas, but can live a bit cheaper than being directly in Uptown Dallas. Choices for living include primarily mid-rises with protected, climate controlled interiors and covered parking.
What is also nice about the Turtle Creek area is that you can quickly get to the Dallas North Tollway if you work in North Dallas or Plano, or even downtown. There is also quick access to I-35 Stemmons freeway as well as Harry Hines Boulevard which takes you straight to the Dallas Love Field Airport.
The livable area of Turtle Creek Dallas is small, with much of the space being taken up by the parks and other city owned areas. This gives more of a feeling of privacy. There are primarily mid-rises here with private entrances that tend to not have street access.

Turtle Creek Dallas is beautiful, with its tree-lined avenues and stately high-rise atmosphere. It is home to many high-end professionals which is obvious when you drive through the area. You see lots of beautiful buildings, luxury cars and apartment buildings as well as people walking from place to place. Turtle Creek Dallas is also home to one of Dallas’ most famous five-star resorts, the Rosewood Mansion at Turtle Creek Dallas. There are luxury living accommodations in and around the Mansion that are very beautiful and picturesque. If quiet, high-end living spaces are what you are looking for, you will most likely love this area. Turtle Creek Dallas address is highly desirable as far as Dallas properties are concerned, and are a stone’s throw away from the high-energy buzz that Uptown Dallas is famous for.

READY to Find an Apartment about this fantastic area? Sign up for our 100% Free-to-You Service to find your perfect apartment in Uptown or nearby areas (Lower Greenville, Knox Henderson, Deep Ellum, etc).  Our free, quick service will save you hours of time and remove your stress.  Free Signup: HERE      When you apply for your apartment, you will also receive a free $100 Amazon card as well as a thank you for using our free service. 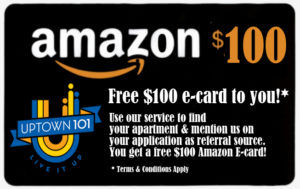